Tony Muxlow Developments Ltd sponsored Oval racer Joe Higgins 21 from Pocklington East Yorkshire has made history by becoming the first ever Novice driver to win a Major Championship in his first race meeting.
Joe an apprentice refrigeration who attended one of our one on one training courses started racing in Autograss at the age of 12 before moving on to compete in the Junior Stoxkarts formula where he became a double points Champion before stepping up to the Senior Formula where he became the Youngest ever British Champion in 2014.

As a gift for his 21st birthday his Uncle agreed to hire him an outing in the much more powerful V8 Stockcar class at Birmingham Wheels. This meeting was their European Championship which rates amongst the drivers as the second most prestigious title after the World Final.
Having never sat in the car before, Joe had 2 practice sessions and unfortunately had to sit out 2 more after clipping the safety barrier and damaging the car. He was gridded for 3 qualifying heats to try and get enough points to Qualify for the main race.
In his first race he managed a Third place which was superb. His second race he managed a Second and after a couple of minor tweaks on his car he went out and won his Third Race. This gave him enough points to be in pole position on the 30 car grid.

The big race saw Joe take an early lead for the first 6 laps when he was passed but entering turn 3 a well timed nudge on the leader saw him retake the lead. Three laps later he was again passed when he had to slow for a back marker. He then set about chasing down the leader and on the final corner he made a late challenge, pushing the leader out and going up the inside to take the Chequered flag.

When interviewed after Joe said” It is unbelievable! I came here hopeing I could scrape enough points to get on the back of the grid. Never in my wildest dreams did I think I would be pole let alone win it. Once I was in second I backed off for a couple of laps to conserve my tyres and then I began to chase after the leader. I could see all the top men coming in my mirrors but I just concentrated on being smooth. Going down the back straight for the last time I knew it was do or die, I held the power on and just hoped I was going to connect otherwise I would be in the wall. Fortunatly it was a perfect hit and I out dragged him to the line. I still can not believe I have won it. Going from a single cylinder 15Bhp Kart engine to 300+Bhp V8 is a massive step so I am just pleased I did not let the team or my sponsors down.
Unfortunatly there was no time for celebrations as next day Joe was in the garage getting his Stoxkart ready to race at Skegness stadium on Tuesday night where he is laying in second place in the season long points title. When asked about his future plans he said “My long term aim is to race the V8s but that will be a couple of years yet as I need to get a budget sorted. For this year I an aiming for the Gold and points championship in the Stoxkarts and if I win either of these I will defend the title next year. I plan to hire a V8 again in September to compete in their World Final as being European Champion I automatically get a place on the grid”. 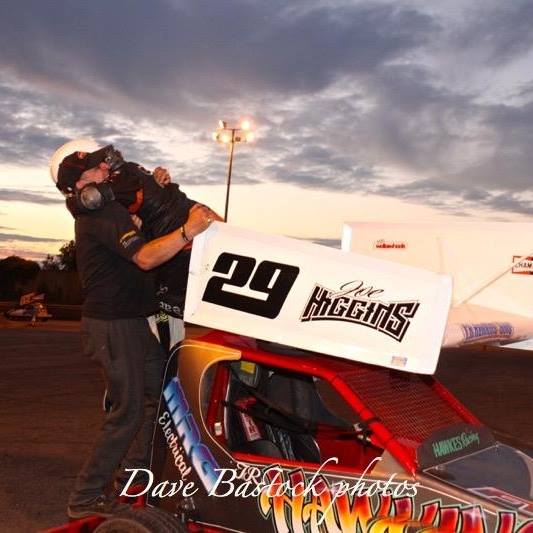 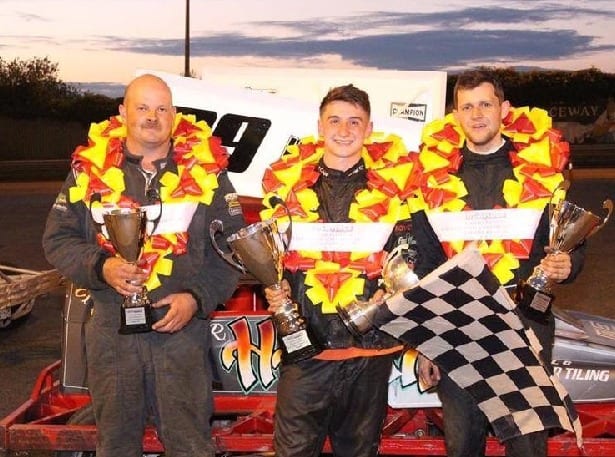 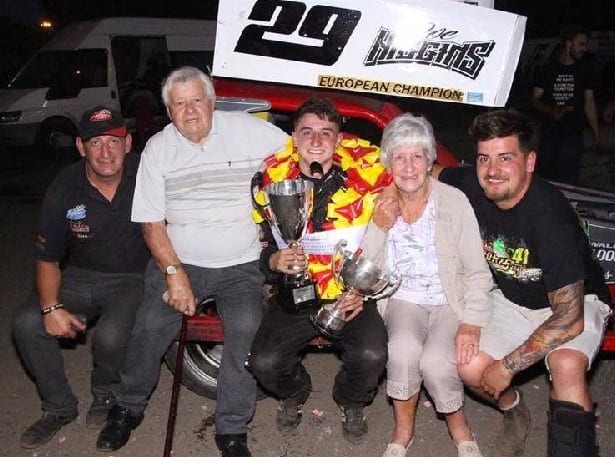